The Medici family was one of the most powerful and influential family’s in Europe during the 14th and 15th centuries. As well as practically ruling the city of Florence, which was supposedly a republic, the Medici family lent money to kings and popes, patronized the greatest artists of the Renaissance, and fostered intellectual growth and education that was unseen before the Renaissance. Eventually, the family would include dukes of Tuscany, popes, and monarchs. It can be generalized the much of the success of the early Renaissance in Florence can be directly or indirectly attributed to the Medici family. 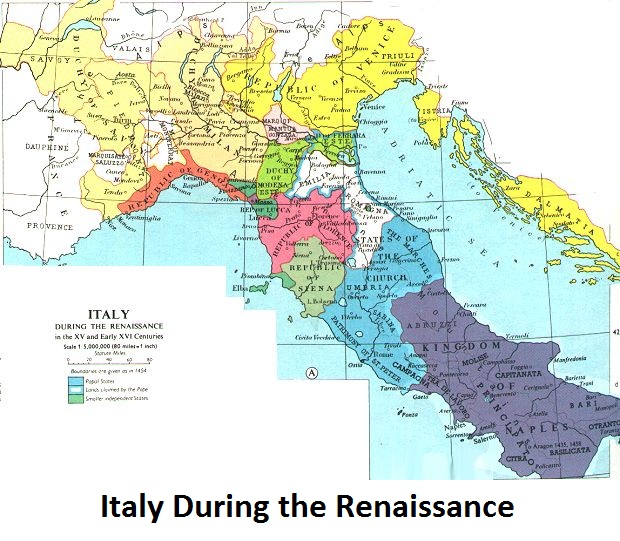 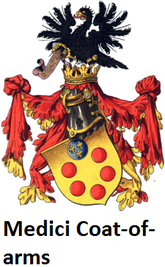 The myth that surronded the genesis of the Medici family began with a knight named Averado who supposedly fought under the banner of Charlemagne. It was said that he passed through Tuscany on the way to Rome, and when in the Mugello valley he heard stories of a monstrous giant that terrorized the people and the countryside. He killed this monster, and in the course of the battle several large blows were dealt to his shield. To commemorate his great victory, Charlemagne awarded him the coat-of-arms of red balls on a field of gold to signify the blows dealt to his shield. While the truth of this myth is doubtful, it was true that that Medici family originated in the Mugello Valley just north of the city of Florence. In the 12th century the family moved into the city where they became wool merchants and joined the guild.

As the city of Florence grew and prospered, so did the Medici family. The wool business grew into an international business; the family often sold to customers in France and the surrounding Italian states as well as the rest of Europe. Alongside this, the first Medici was elected to public office in 1296. From this point on, the Medici family played a major role in the republic’s political future. The family sometimes held so much voting power in the republic that they alone decided the fate and course of the city. The business experienced its greatest success in the 14th century, and it was due to the success of the wool trade that Giovanni di Bicci was able to found a bank in Florence in the latter half of the 14th century. By the early 15th century, the Medici bank was the primary bank of both the pope and monarchs all across Europe. It was with the founding of the bank that the Medici’s became even more successful and influential. It was in this success that Cosimo di Medici came to power.