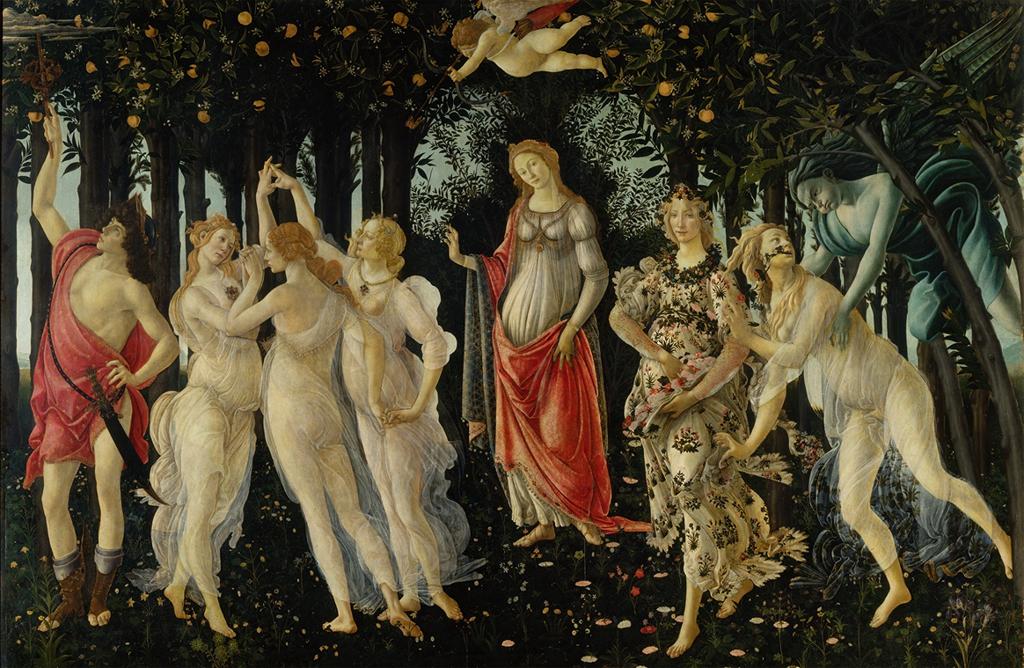 La Primavera, meaning spring, is an allegorical painting that Sandro painted for the Medici villa at Castello. It was given its name by Vasari, “and likewise another Venus, whom the Graces are covering with flowers as a symbol of spring; and all this he is seen to have expressed very gracefully.”  There is evidence to suggest that Sandro painted this work to celebrate the wedding of Pierfranceso de Medici to Semiramide Appiani in May 1482. It was completed as part of a trio of works to adorn the villa, all of which used classical imagery to portray neo-platonic ideals. La Primavera was considered a sister painting of this website’s chosen masterpiece, The Birth of Venus, as well as the beautiful Pallas and Centaur. Both spring and The Birth of Venus are similar in both content, that being Venus, and style.
The characters moving from left to right are Mercury, the Three Graces, Cupid, Venus, Flora, Chloris, and Zephyr. The painting is a dynamic allegory of the imbuement of love to earth  via the incarnation of the neo-platonic ideal of love, Venus. Moving from right to love, passion is instilled to Earth in the form of beauty. From there, beauty undergoes beautifying grace, and then it is directed to heaven to take its role amongst heaven as a platonic ideal. As well as an allegory of the profound school of neo-platonic thought that was popular in Florence at the time, the painting also illustrates a myth told by Ovid. Zephyr married the nymph Chloris, who brought forth flowers. Zephyr then changed her into the goddess Flora. Both of these descriptions put together create a scene of not a still shot of life, but a painting that depicts a dynamic progression of both the soul and love.