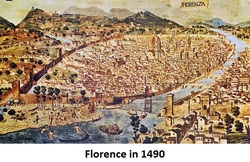 Alessandro di Mariano di Vanni Filipepi was born in 1445 the son of a hide tanner named Mariano. He was one of eight sons, four of whom survived to adulthood. Sandro’s eldest brother Mariano was a broker and an investor in the Florentine public debt. In that period of Florentine history, that was a very sound investment. Because of his dealings as a broker, Mariano received the nickname Boticello, which means “little tub.” The brothers chose to use this surname as opposed to the family surname, Filipepi. As he grew older, Sandro shortened his full name, Alessandro, to Sandro in conversation with his friends and family. 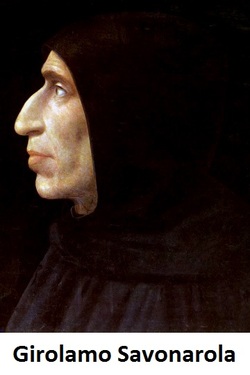 In 1481, Sandro was commissioned by the church to travel to Rome to work on frescoes that were to decorate the walls of the Sistine chapel. Vasari accounted that Sandro was placed as the master of the group of painters that he worked with, Perugino, Ghirlandaio, and Signorelli, however the truth of this claim is dubious. Either way, his importance in the painting of the adornment of the walls of the chapel cannot be ignored. It was upon return from Rome between 1482 and 1485 that Sandro attended the first of the sermons of the preacher Girolamo Savonarola. He preached a fire and brimstone sermon that dealt mainly with a Christian renewal, the foundation of a new Jerusalem at Florence, and diatribes against clerical and political corruption. He would often draw crowds so large that he would have to preach inside of the cathedral. In 1497, Savonarola was excommunicated, however, he continued to preach. He was arrested and imprisoned, and under torture he admitted that his statements and prophecies were false. He was sentenced to death, and was hanged and then his body was burned. The teachings of Savonarola had a profound impact on both the tone and subject of Sandro’s works, as well as his relationship with the Medici family.

Because of his connection Savonarola, who preached vehemently against the Medici family, Sandro fell out of favor with his longtime patrons. Without them, Sandro struggled to find work and was soon destitute and forced to live with family members. Alongside this, much of Sandro’s popularity in the art circles of Florence and Italy faded away.  When he died in 1510, Sandro was very much unknown amongst the history of Italian art, besides as an early master in that Vasari recorded. In the 19th century, Sandro was rediscovered and recognized as the most influential and important painter of the early Italian Renaissance. 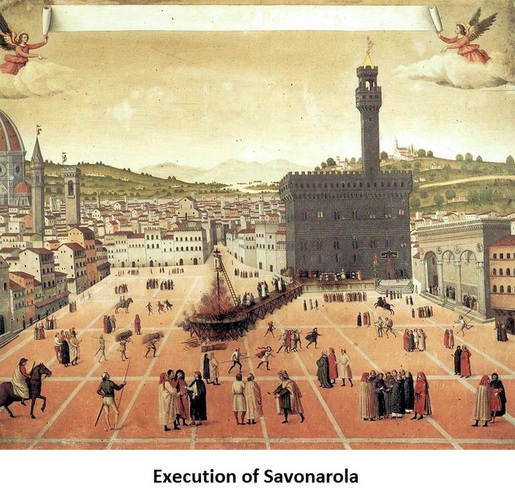